Prologis Inc, the global leader in logistics real estate, is extending its UK partnerships with climate change charity ‘Cool Earth’ and sustainability certification company ‘The Planet Mark’ to its European operations, as part of a pioneering initiative to reduce and mitigate whole-life carbon emissions in all its new logistics buildings. Under the programme, Prologis will work with Cool Earth to fund the protection of rainforests to mitigate unavoidable embodied carbon emissions in its new developments across Europe and, in this way, help protect an area of rainforest 31 times larger than the size of each building.

In the UK, Prologis was the first industrial company to introduce a carbon reduction and mitigation program in 2008. Over the past 12 years 55 Prologis UK developments have been certified by the Planet Mark documenting reductions of almost 300,000 tons of CO₂.

Ben Bannatyne, President Prologis Europe, said: “Prologis has been a pioneer in the UK in reducing ‘whole-life carbon emissions’ and in particular ‘embodied carbon’ - the carbon emitted during the construction of a new building. Embodied carbon can be reduced through good design, but it cannot be eliminated altogether. In partnership with Cool Earth and The Planet Mark, we have gone above and beyond by mitigating unavoidable embodied carbon emissions in the UK. We have already helped to protect 12,500 acres of rainforest in Peru and Papua New Guinea – the equivalent of 50 square kilometres, or the size of the Luxembourg city. Now that we have extended the initiative to mainland Europe, we see huge potential to make an even bigger contribution to reducing our carbon footprint across Europe and providing more help to the development of sustainable rainforest communities.”

By working with Cool Earth, Prologis supports the people who live in the rainforest and protects the trees that we rely on globally to store carbon, produce fresh water, and shield diverse species of plants and animals. Prologis is already helping rainforest communities to lock in 3.5 million tonnes of carbon dioxide by protecting 3.2 million trees, mitigating an estimated 600,000 tonnes of carbon dioxide emissions. As part of this partnership, the company has also educated 7,500 pupils at schools close to its logistics parks through sustainability workshops. Delivered by The Eden Project, these workshops are offered free of charge to local schools and aim to help children understand the important role they can play in protecting the planet.

“We make the donation to Cool Earth at the outset of each new development project precisely because the rainforest is so fragile, and we want to support the preservation of this ecosystem as soon as possible,” he added.

While the protection of rainforest communities might at first seem far removed from European logistics real estate, Bannatyne said we must all play our part in keeping rainforests standing. “As the planet's global safety net, supporting local people to protect rainforest is the smartest, most positive climate action there is. Rainforest trees lock in a quarter of the world’s carbon emissions. and protect over six million species of plants and animals, forming an essential ecosystem which is crucial to our survival. Our partnership with Cool Earth will allow us to further demonstrate a robust, science-based approach to the mitigation of climate change that has been shown to have extensive benefits for society, culture and biodiversity.”

Prologis made the announcement on World Environment Day (5TH June 2020) as part of its goal to raise sustainability standards across the European industrial property sector and support the United Nation’s Decade of Action campaign.

Matthew Owen, director of climate change charity, Cool Earth said: “Prologis has made, and continues to make, a powerful contribution to sustainable development through measuring and reducing the whole-life carbon emissions of its buildings. No other developer has gone this far.

“This is the Decade of Action, where every institution and every individual must contribute to society, tackling climate change and reversing biodiversity loss. To have a chance of limiting global warming to 1.5C, we need to reduce carbon emissions by 50 percent by 2030. This year must usher in a decade of ambitious action to deliver these global goals by 2030.”

Steve Malkin, CEO of Planet First and founder of The Planet Mark said: “Prologis’ commitment to sustainability demonstrates true leadership in its field and is helping to raise standards across the industry. We very much hope that others will follow Prologis’ example so that in the next 10 years we can make this world, our home and our civilisation, happier, safer and more sustainable.” 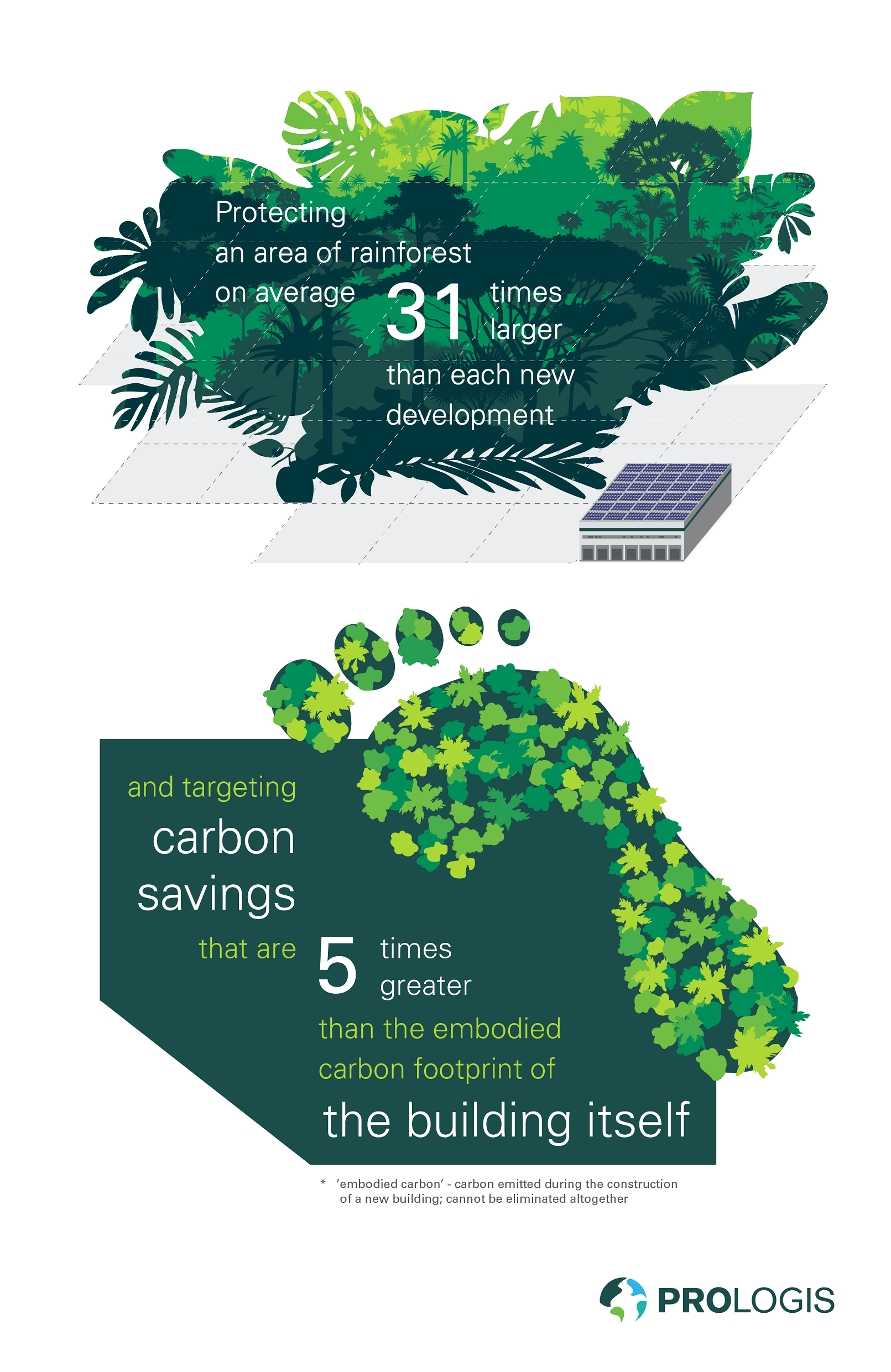