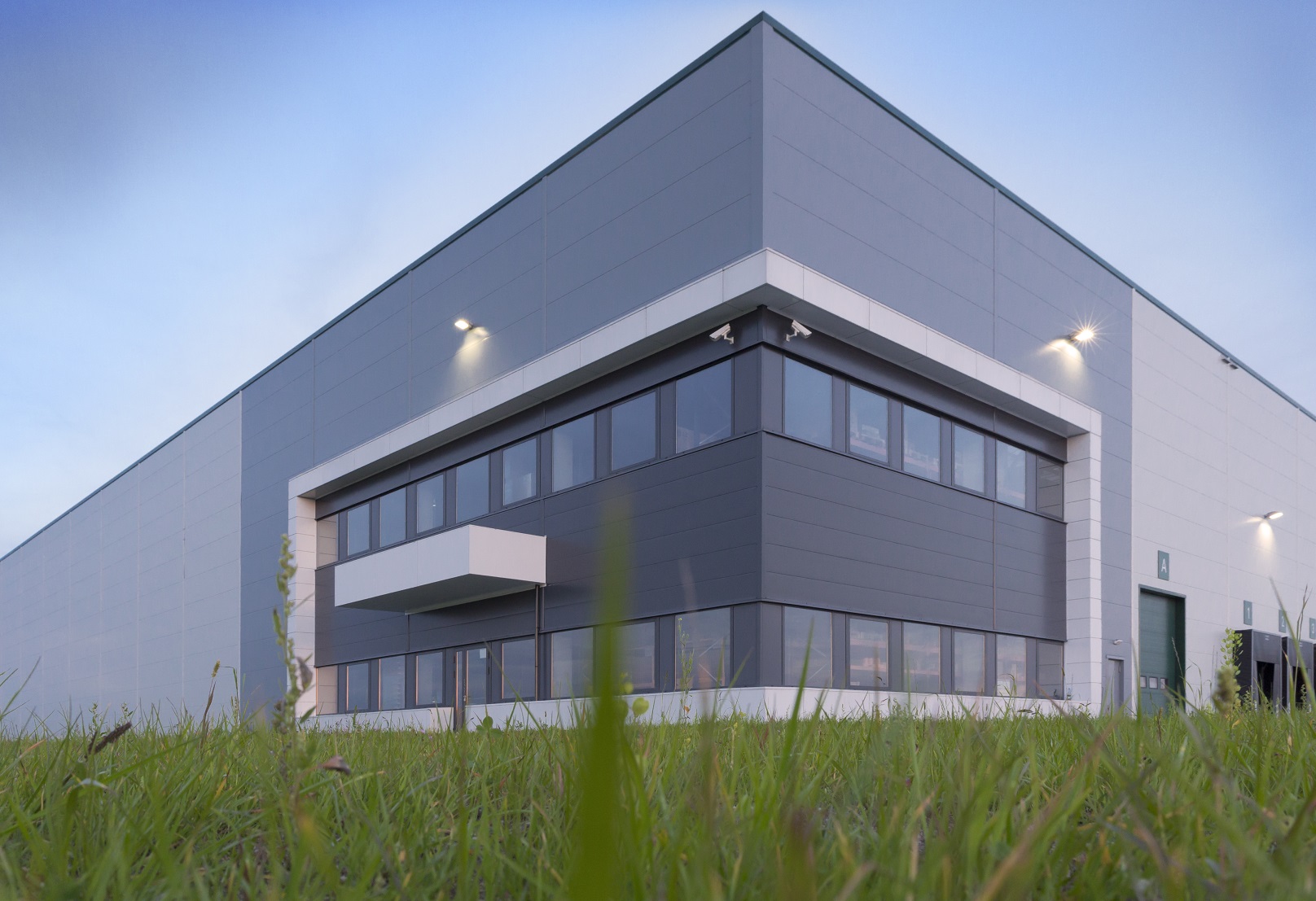 Today, pushing the boundaries of sustainability to an entirely new level of business commitment has never been more important. In line with the growing e-commerce sector, the volume of new warehousing is increasing, and with this the industry is also having a greater impact on the environment, society and the economy. Prologis' data shows that goods worth over USD 2 tin per year flow through the company's logistics centres around the world - that's 2.5 pet of global GDP, or a value comparable to the annual exports of China.

Add to that 90 mln sqm of space in its portfolio in the world, with a life-cycle of everal dozen years, and the impact that the company has on the environment is undeniable. As such, Prologis looks at this issue more broadly than through the prism of the environment alone. It focuses on re­sponsibility across many dimensions - environmental, social and those related to business ethics - while the effectiveness of its activities has been systematically measured and reported for the last fifteen years in terms of its ESG (environmental, so­cial and governance) goals. 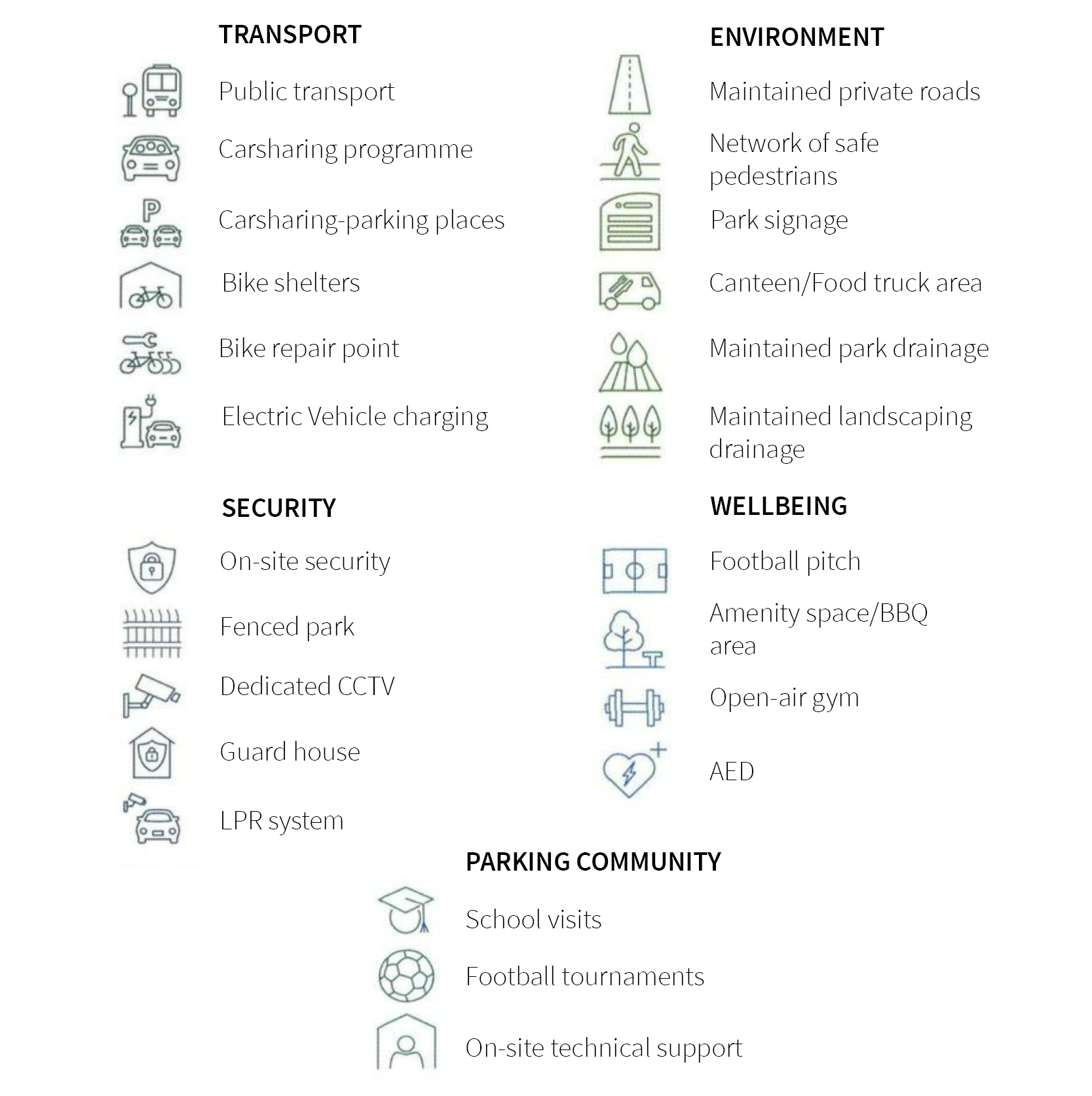 BREEAM is just the beginning

Sustainable development is one of the pillars of the logistics sector's envi­ronmental responsibility. Today, ware­house centres are designed to emit as little carbon dioxide as possible and use natural resources to a minimum, and the market standard for green building is the BREEAM certification system. Prologis facilities the world over have been certified by BREEAM for over thirteen years, at various dif­ferent levels depending on the re­gion. In Poland, the company was the first warehouse developer to start implementing certification in industrial buildings. Currently, all Prologis invest­ments are subject to accreditation at Very Good level and even higher.

But even the highest level of certifi­cation is only one element of a holistic approach to balancing environmental impact and attaining carbon neutral­ity. That such a goal is possible was demonstrated by Prologis when it was the world's first real estate company listed on the Dow Jones S&P 100 to become operationally carbon-neutral. Furthermore, by 2025, the company plans to integrate carbon-neutrality into its process for building new ware­houses. That this target is within reach is evidenced by the figures: in the last four years alone, Prologis has reduced greenhouse gas emissions by 37 pet in its parks - the equiva­lent of removing nearly half a million cars from the streets. This was made possible, among other factors, by the solar installations in Prologis' centres around the world, which generate a total of 252 MW of green energy. This would be sufficient power to sup­ply over 42,000 single-family homes all year round. Green energy means the responsible management of re­sources, lower operating costs, and a measurable effect in reducing carbon footprint - in just one Prologis ware­house in Hamburg, a solar installation allows tenants to save as much as 293 tonnes of COz every year.

Prologis has extensive experience in smart and green building across Europe 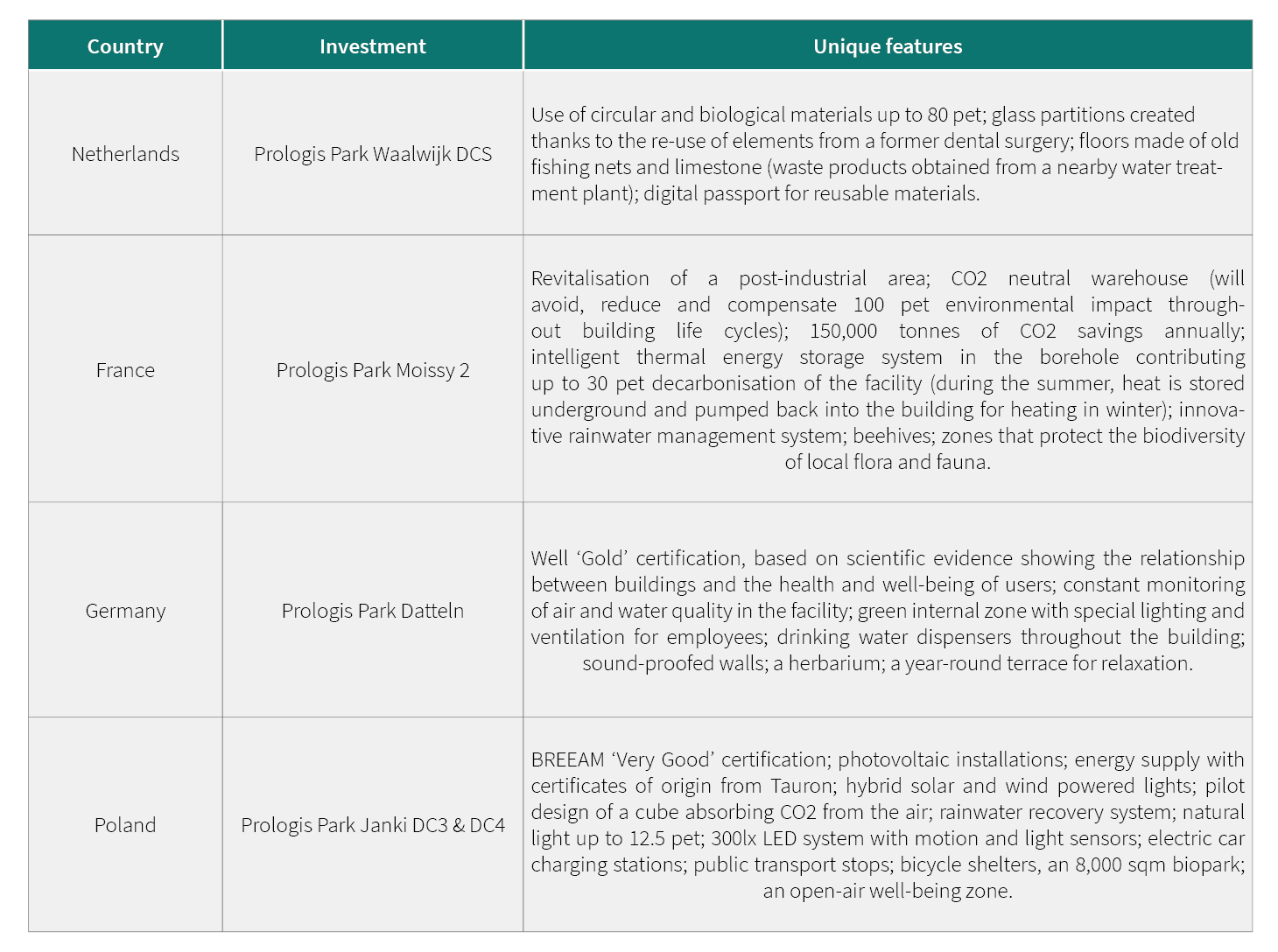 For this reason, Prologis plans to invest intensively over the next four years to double its global capacity to a gigantic 400 MW of solar energy, a quarter of which will be generated in the Benelux countries. In Western Europe, such implementations are easier to make than in Poland, partly thanks to large subsidies for green technology. In addition, the Polish climate does not have the energy-generating potential of solar farms in, say, California - but this still won't stop Prologis investing in green en­ergy in Poland. Prologis has found an alternative solution by ordering energy with certificates of origin from Tauron for domestic customers this year. As a result, this is contrib­uting to the popularisation of RES in Poland and responds to the needs of customers who are increasingly interested in purchasing green en­ergy. In addition, all the roofs in the developer's new warehouses are prepared for solar installations with a standard load capacity of 30 kg per sqm. On average, one ware­house building has tens of thou­sands of square metres of space that needs to be well lit, heated and supplied with electricity.

Generating electricity plays a significant role in emissions, while it also contributes to the operating costs of storage fa­cilities. Therefore, regardless of rap­idly rising prices, having one's own source of green energy is a win-win situation for all three parties: for the environment, for the owner of the facility, and for customers - who are important allies in pro-environmen­tal activities. For an increasing num­ber of Prologis' clients in Poland, including such international opera­tors as DHL and the Raben Group, cutting emissions is an important el­ement of their own ESG strategies. That is why developers are offering buildings with ever better thermal insulation, systems for measuring and controlling media consumption, cool roofs to reduce heat absorp­tion, natural lighting, and energy-saving LED lighting. Prologis illumi­nates its warehouses with intelligent LED lighting systems using sensors that respond to light and movement. This solution offers up to 80 pet savings in energy consumption compared to conventional lights. In the next four years, Prologis aims to install LED lighting in 100 pet of its global portfolio. It also plans to fit cool roofs on all its buildings, wher­ever the climate is suitable for this.

ESG means working today with the future in mind

According to the estimates of Prologis' research department, over the next five years it will be neces­sary to double the space allocated to e-commerce operations. A re­sponsible response to this demand from the industry is increased use of circular construction methods - emphasising the use of recycled or reclaimed elements and designing facilities in such a way as to allow materials to be reused. One exam­ple of such an approach at Prologis Park Waalwijk in the Netherlands, About 30 pet of the facility is made of circular and biological materials, and in offices the proportion is as high as 80 pet. In addition, all ma­terials have been catalogued with a special digital passport, which facilitates the identification of valu­able elements. Thanks to this, it will be possible to reuse them after the end of the facility's life.

Prologis is a developer that owns all its properties into the long term. This is why it designs and builds warehouses that will serve its clients for years. This approach leads to in­vestment in specific technologies that help create closed-loop and virtually self-sufficient real estate. One exam­ple is a building in Eindhoven in the Netherlands, which features special heat pumps for the heating, ventila­tion and air conditioning of the ware­house without the use of fossil fuels.

Modern technological solutions help us to effectively minimise the environmental impact of construc­tion. But what can we do with emis­sions that simply cannot be avoid­ed over the building's entire life cycle? Here, ways of compensating for emissions come to the rescue. Prologis has established, among oth­er things, a cooperation with the Cool Earth organisation, thanks to which the company will be able to balance out the inevitable carbon dioxide emissions of new investments, while protecting areas of rainforest more than thirty times larger than each newly built facility. In the last year alone, warehouses built by Prologis in Central Europe helped to protect 784 ha of rainforest.

ESG is not an ideology, it's about people

Europe is a very important market for Prologis, and the company is determined to maintain its status as a leader in sustainable development. Therefore, it is constantly developing its PARKIife programme, within which customers and their employ­ees can benefit from a number of amenities on the premises of Pro­logis' facilities. These include sports fields, cycle paths, outdoor gyms and libraries, barbecue areas and green spaces for relaxation. PARKIife also plays an important role in promoting low-emission modes of transport. The scheme has seen the installa­tion of bicycle shelters and charg­ing stations for electric cars, while offering special parking spaces for carsharing and, wherever possible, providing public transport stops in the immediate vicinity of parks. An­other element of the programme in­volves improving working conditions inside buildings to make Prologis' logistics parks more comfortable for the people working in them. As such, Prologis cares about installing ad­equate lighting - including natural light - good ventilation, amenities for people with reduced mobility, and high-quality social areas. All these elements have made the company's logistics properties vibrant and com­pact communities, and by fostering a friendly workplace, they help clients attract and retain employees, while ensuring that they stand out from the competition.

The essence of Prologis' ESG strategy is a concern for nature as well as for human beings. In this spirit, Prologis' teams attend Impact Day, the company's global volun­teering day, every year. Addition­ally, each employee can allocatefour working days per year for work­ing in worthy organisations of their own choosing. During the pandemic, Prologis' Europe-wide 'Dock Doors of Giving' charity programme saw the company support almost one hundred local organisations with aid worth over EUR 275,000. Through its 'Space for Good' programme, it has allocated over 1 mln sqm of free space to the fight against Covid-19 and launched a global aid fund worth USD 5 mln. The company has also introduced employee support pro­grammes, and Prologis was included in weekly magazine Wprost's list of the 50 companies in Poland that pro­vided the best care for their employ­ees during Covid-19.

ESG is not a one-off project

The activities of many companies, regardless of the nature of their busi­nesses, show that the implementation of an ESG strategy is not an additional cost, but a profitable investment re­flected in higher valuations and grow­ing interest on the part of customers. From green investments, to sustain­able building designs and employee programmes, Prologis aims to cre­ate value far beyond its real estate, putting people and the planet first. The entire business operates in this spirit, and all the company's parks are constructed with this in mind, while its figures published each and every year show how far the company has come in meeting its goals, in accord­ance with Global Reporting Initiative guidelines.

The material was created in cooperation and published in Eurobuild.