Why does it matter? 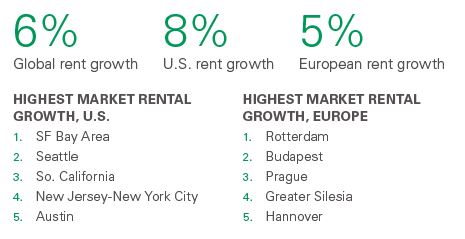 Operating conditions are solid, and structural drivers for demand and development economics suggest another year of healthy growth. Of note, Europe appears poised to lead rent growth, as pent-up pricing power is accelerating rent growth on the continent. However, downside global risks include macroeconomic headwinds that could subdue sentiment. Nevertheless, should volatility increase in the general environment, structural drivers will become a more apparent support to growth.

Key themes for 2019 include the following:

What does it mean for customers?

In an era of increased competition, logistics customers with thorough planning processes and a forward-thinking mentality that enables them to act quickly will secure the best real estate at the best prices. Particularly in infill areas, vacancy rates were low and replacement costs rose. At the same time, the importance of proximity to the urban consumer for faster delivery continued to grow. Supply chain evolution and fundamentals suggest that these trends will persist. Logistics planning with an end-to-end view on supply chains must factor in the value of time as a function of distance to consumers. The closer to the end consumer, the better. We expect that rents will continue to rise in 2019—even if at a slower pace.

What does it mean for investors?

Valuations in fast-moving markets can be challenging, and they require a deep knowledge of local markets. Structural drivers should underpin growth. Yet, there will be some instances of outperformance. Location is a more important factor than ever in investment decisions. Markets with high barriers to supply and those serving urban cores will find a steady flow of requirements from both business expansion plans and reassessment of supply chain strategies. Such markets should enjoy long-term forecasts of low vacancies and rent growth.

U.S. rent growth outperformed again, with 8.0% in 2018, as both the economics of development and market conditions allowed landlords to command higher rents.Rising labor, materials and land costs pushed replacement costs to new highs. At the same time, stronger economic growth, a structural shift to build out decentralized distribution networks, and a push to stock up inventories ahead of tariffs, lifted demand for space. Even as new deliveries reached their highest level in this cycle, demand was able to exceed new supply, resulting in an historic low vacancy of 4.5%. 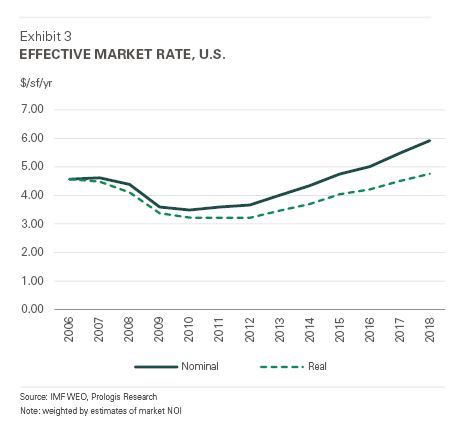 Rent growth accelerated in 2018.Net effective rents rose 5% for Europe as a whole, the highest in data dating back more than 10 years. This growth reflects both increases in headline rents and an unwinding of concessions.

Several drivers coalesced.First is strong market fundamentals, with positive customer sentiment, robust demand, disciplined supply, land scarcity and historic low vacancy of 3.2%. Second, rents are still at a discount compared to prior benchmarks and replacement-cost rents in most markets. Third, replacement costs are rising, driven by increasing construction costs and land prices, which is affecting development underwriting and pushing rent growth in most markets.

The European continent played an outsized role with 6% growth.Recent years enjoyed only pockets of growth, but the picture changed noticeably in 2018, with increases registered across most markets. Two key themes emerged. First, robust rent growth arose in mature markets such as Munich, Southern Netherlands, Gothenburg and Prague. Rent growth in these markets was driven by strong market fundamentals and land scarcity. Second, markets such as Paris, Warsaw, Silesia and Milan are in the early phase of the rent cycle. Rents in these markets remain closer to their historic lows and supply is less active, creating the potential for rapidly improving market conditions. 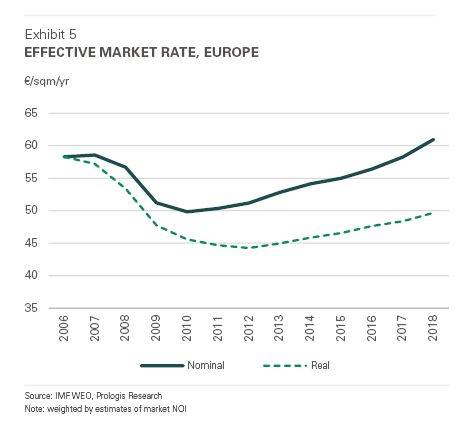 In Asia, rental performance has closely mirrored the market fundamental conditions local to each market. Highlights by major regions include:

Insight: Concession Levels Across the Globe

Throughout this report, we refer to rental rates on a net effective basis. Net effective rents are principally net of free rent. By doing so, we focus on the true economic terms of the offer. The global average free rent equates to roughly 5% of rent, or less than one month per year of term. In our 2016 paper, we highlighted that a handful of markets use concessions aggressively, in some cases creating inducements that can amount to more than 25% of total rent. This can skew the market’s perception of rents. We also noted that leases in Poland offer the most concessions among markets around the world. However, as of this writing, concessions in Poland have begun to decline and in fact are now more than 20% lower than in 2016. 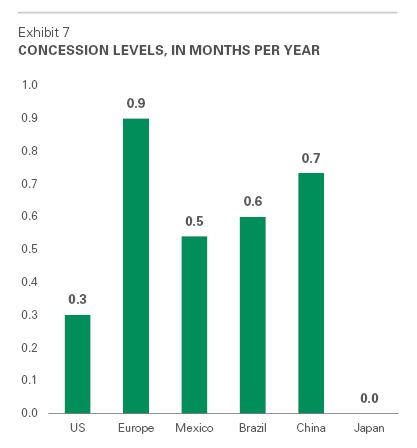 Concession levels have been dwindling across the globe, but we do see differences. In Europe, concession levels are varied as transparency and the rates of recovery differ by market. Overall, concessions have clearly declined from 2010 peak levels of 2.1 months per year to just 0.9 in 2018. Levels lag the U.S., which has led rental growth over the past few years. Japan, a market known for its stability, has zero months of concessions. Emerging markets are broadly similar, with Mexico leading.

2017: A Year of Accelerated Rent Growth